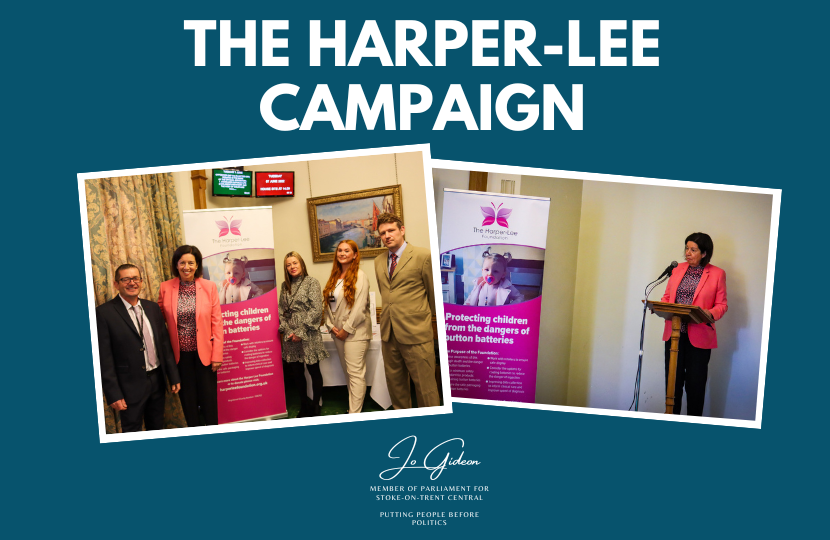 Harper-Lee lost her life as a result of swallowing a button battery. In the weeks that followed the toddler’s tragic death, Stacy, her incredibly brave mother started the Harper-Lee’s Law Campaign. Stacy wanted to make sure that what she and her family have gone through did not happen to other families. She has the support of the local newspaper, the Sentinel, and myself as the local Member-of Parliament. In that capacity I initiated a Private Members’ Bill in Parliament on the Safety of Button Batteries, and began discussing the issue with a wide variety of organisations.

The Harper-Lee Foundation is a registered charity, which enables us to expand on the work of the campaign and raise funds to provide a single point of contact for agencies working on this agenda, to commission research, support educational campaigns and provide advice and support for families.

The Harper-Lee Foundation was set up to carry forward and expand the work of the Harper-Lee’s Law Campaign, providing a lasting legacy following the death of Harper-Lee Fanthorpe. We will work with government, manufacturers, retailers, educators, charities and health professionals to reduce the risk to children of accidents and death from foreign body ingestion such as button and coin battery ingestion.

The object of the Charity is:

To preserve and protect the health of children and young people and by extension their families and carers at risk of accident, injury or death caused by foreign body ingestion such as button and coin battery ingestion, in particular by: