The Times: Boris Johnson and levelling up: how will a music venue and a few flats solve ‘decades of neglect’? 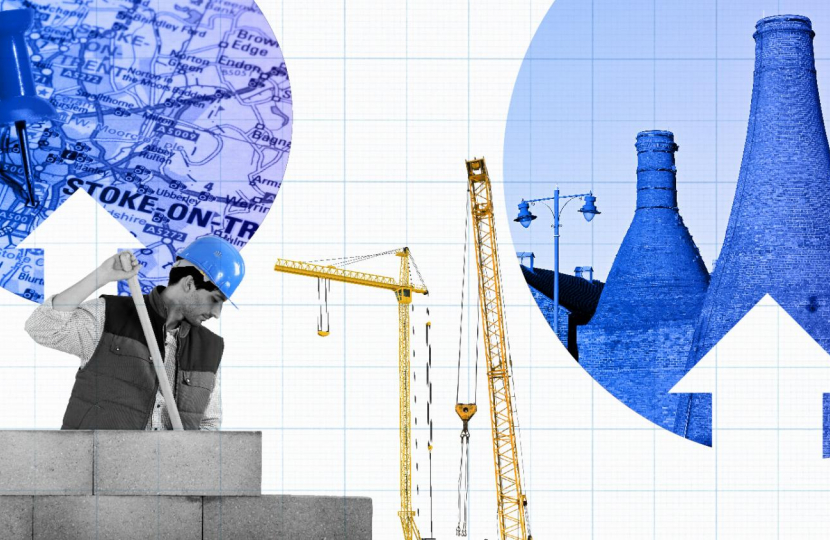 Levelling up — what’s that?” asks Anne Beckett, pausing for an ice cream outside the Potteries shopping centre in Stoke-on-Trent.

Her answer is actually a few hundred metres away, where a disused bus station is slowly being converted into a £20 million, 3,600-seat music arena. Yet Beckett, 76, a former teacher — enjoying the sun with her sister Linda, 73 – has never heard of it.

The sisters, lifelong Labour voters, switched to the Tories for the first time in 2019. Even if they cannot name Boris Johnson’s flagship policy, they voted blue out of a sense that Stoke-on-Trent had been “left behind” by a succession of Labour MPs.

Stoke, local Tories like to say, is the “litmus test” for the Johnson project. It won £56 million from the first round of levelling-up funding, more than any other local authority; Birmingham, a city four times as large, received £4 million less.

The charm offensive continues: the whole cabinet came here in May, followed by the Tory leadership hustings in July, during which Liz Truss name-dropped local confectioner Walker’s Toffee. But both candidates have been largely silent on “levelling up”. Some ministers have whispered that the slogan may be axed. As its architect leaves office, does levelling up have a future — and can the red wall Tories survive without it?

Levelling up crept into the party’s 2019 manifesto, a loosely defined pledge to use “Brexit freedoms” to build prosperity and strengthen every part of the country. Polling by More in Common, a think tank, found that 57 per cent of 2019 Tory voters thought the government was initially committed to it.

Yet it took more than two years for the government to spell out exactly what that policy might mean. Now, the numbers who believe in the government’s levelling-up commitment have plunged to 32 per cent.

Stoke remains a city in limbo between the riches of its past and its promised future. In the Potteries Museum & Art Gallery, the Staffordshire Hoard — the largest collection of Anglo-Saxon gold and silver metalwork found — hints of the kingdom of Mercia’s former glories.

More recently, Stoke was a pottery and mining city, which gave residents like former miner Roy Greaves, 89, a sense of purpose. He took retirement when the pits closed and has watched the decades-long decline.

He thinks the centre should be levelled, never mind up. “I’d knock down most of it! Look at it,” he says, sitting on a bench in Hanley, the city centre. “Nearly half of the shops are empty, the rest aren’t doing proper business. They can’t bring any new investment in as there’s nobody around who buys anything. People just come in to have a bite to eat, then go home and watch television.”

The average person in Britain gets nearly 63 years of “healthy” life; in Stoke it is 55. Children here fall behind before they even reach secondary school, with some of the lowest primary literacy and maths performances in the country. By GCSEs, children are still performing well below average.

Disposable household income is £15,455, 28 per cent below the national average of £21,433. Twenty-four people a day die of smoking-related illnesses in the city.

Yet data only partly explains why Stoke has received more levelling-up funding than any other area. Its three Conservative MPs have been bullish in lobbying for grants in Westminster, earning them the nickname “Stoke mafia” among ministers. Critics scream this is “pork-barrel” politics in action. “We work bloody hard,” retorts Jo Gideon, MP for Stoke-on-Trent Central. “The role of all MPs is to make the case for your area.”

Levelling up is a “philosophy”, she says, rather than a series of “actions”, although she is keen to stress that tangible pledges have been made. One side of her office has been turned into a “levelling-up wall”, listing grants given by the Tories to the city totalling well into the hundreds of millions. “It’s very obvious that stuff is getting done.”

In 2016, 69.4 per cent of her city voted to leave the EU, earning it the media accolade of Britain’s Brexit capital. A desire to deliver levelling up is tied up in that vote, Gideon says. “There was a sense that we hadn’t taken back control for a very long time because nothing had happened here.” After what she calls “decades of neglect” by her Labour predecessors, it will cost “billions and billions” to solve — but there “needs to be a sense of starting to sort things out”.

Progress so far has been slow, and even backwards in many of the indices the government is using to measure levelling up, not least because of the pandemic. Nationally, healthy life expectancy has fallen. Between 2019 and 2020, productivity in Stoke rose faster than in the rest of the West Midlands — but is still well behind that of London.

In Stoke, aside from a few cranes, change in the town is hard to spot. A total of £31.7 million is being spent on transforming bus services — but that funding, Gideon says, will not arrive until the spring. Meanwhile, the bus company has been cancelling services. Up to 500 Home Office jobs will move here too, but not until the mid-2020s.

Most of the £56 million levelling-up fund will be spent on vast capital projects, regenerating the city’s industrial factories and warehouses. As well as Etruscan Square in Hanley — the largest city centre development in the West Midlands, which will include the indoor arena — the council wants to develop an old goods yard into a “micro neighbourhood” of flats.

These developments will undoubtedly bring in people and investment, but they are not stirring the hearts of the residents. “I’d put in a few more coffee bars instead,” says lorry driver Clive Hallmark, pointing at the empty shops. “Give people places to meet rather than just hanging around.”

When New York was regenerated in the 1970s and 1980s, it was smaller changes that had the biggest effect on people’s attitude towards the city: restoring old fountains in parks and cleaning up dogs’ mess, for example, made residents proud of their public spaces again.

True, Stoke’s city centre boasts a few more restaurants with craft beer and outdoor seating than it did two years ago – plus a brand new Wagamama — but when it comes to levelling up, people want changes to be “hyperlocal”, says Luke Tryl, UK director of More in Common, who has been canvassing red wall voters for the past three years. “It certainly isn’t about big infrastructure to make it easier for people to get to London, but it’s also not even about redoing up the big park in the centre of town, which most people don’t use on a regular basis.

“Instead, people talk about the park round the corner — they want to take their kids but can’t because it’s covered in glass, or the local parade of shops that looks really run down or has boarded-up lots. They want their local environment to feel nicer.”

Another crucial factor is opportunity. To David Harrop, 33, levelling up is “just something to satisfy the general discourse”. Harrop, a warehouse worker and aspiring author, didn’t vote in 2019, but might consider it if someone tried to transform the local workforce. “I’d like a real concerted effort to introduce some training and allow people to diversify. You have to be so adaptable in this labour market,” he said.

Harrop says most of the jobs available are still in distribution — a far cry, he says, from the proud industrial roles of the past.

Tryl says voters want to feel “part of something” again, rather than receive handouts. “I think that’s why [Tees Valley mayor Ben] Houchen’s green jobs rhetoric plays so well. It not only brings in investment for an industry on the up, but also connects communities to a sense of a new national mission again.”

Devolution — letting administrations such as Houchen’s decide how to spend their own money — is mentioned in the levelling-up white paper, but Johnson did little to further its cause, says Henri Murison, chief executive of the Northern Powerhouse Partnership. “Existing devolution, made possible by George Osborne when in government, has with devolved funds made much more impact than anything the outgoing prime minister actually got around to doing.”

Truss is not thought to be a fan of levelling up. Gideon is confident that its principles, at least, will survive — not least because of Truss’s obsession with productivity. And whether Truss likes it or not, the majority she stands to inherit is thanks to a vote for tangible change: a desire by people in Stoke to feel proud of their home and vocation. Will a new music venue and some flats be enough to win again?