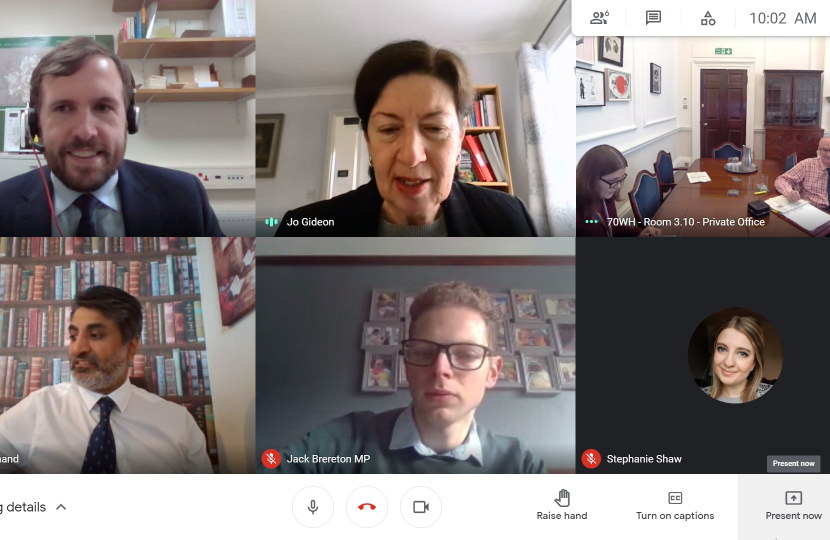 Yesterday, the three MPs for Stoke-on-Trent met with Lord Agnew, Minister of State at the Cabinet Office, to discuss their ambition to see a new campus for government offices in Stoke-on-Trent. Jonathan Gullis MP, Jack Brereton MP, and Jo Gideon MP outlined to the Minister how Stoke-on-Trent is a city on the up and would be an excellent home for a number of departments.

In their meeting, Stoke-on-Trent’s MPs were united in praising the strengths of the city, including local educational institutions such as Staffordshire University and the Sixth Form College. MPs also made the case for the city’s excellent connectivity, located as it is on a direct train line from London and within 60 minutes of four international airports. The city is also making great strides in terms of its economy and job growth. Stoke-on-Trent was ranked 1st for job growth in 2020, was the eighth fastest growing economy in England between 2015 – 2018 and created 8,000 jobs over the last five years.

Although setting up a new Government office is not an overnight task, the MPs were delighted that Lord Agnew confirmed in the meeting that Stoke-on-Trent makes a strong case as a suitable location for a new Government campus.

Jo Gideon, MP for Stoke Stoke-on-Trent Central, said: “We are all excited by the prospect of increasing the variety of good local jobs by securing a Government office campus in Stoke-on-Trent, so that those who want to work and live in the city have greater choice and opportunities. It is crucial that more of the Civil Service is based in our regional towns and cities, to better reflect the priorities and challenges of the country as a whole.

Relocating parts of it to areas outside of London marks a significant step in the right direction and is key to the Government’s levelling up agenda. We are city rich in opportunity, and such a move would be a boon to the local economy bringing large numbers of well-paid jobs. I am grateful to Lord Agnew for his time and will continue to support efforts to bring more Government offices to Stoke-on-Trent.”

Jonathan Gullis, MP for Stoke-on-Trent North, Kidsgrove & Talke, said: “I want to thank Lord Agnew and his Cabinet Office colleagues for taking the time to meet with me and my fellow Stoke-on-Trent MPs. It was great to hear that our city is under consideration for a new home for a Government departmental office campus. Places for Growth is a fantastic initiative that could bring hundreds of well paid jobs to the city and I believe that a Whitehall move to Stoke-on-Trent would be a litmus test of the Government’s levelling up ambitions.

This meeting follows on from my question to the Home Secretary earlier in the week. It was great to hear in her reply that she still holds such affection for her adopted city, based on her days spent as a student at Keele University. As I said to Lord Agnew, I strongly believe that our city is a great fit for a number of Government departmental offices and will continue to push hard for this in Westminster.”

Jack Brereton, MP for Stoke-on-Trent South, said: “We have discussed the huge potential for a Government department to set up in Stoke-on-Trent for some time, our city has so much to offer in being the new home for a department.

With plenty of skilled people locally ready to take on a civil service jobs, ideally located at the heart of the country and more affordable than London, there really could not be a better suited place.  I am 100% behind this bid and will continue to lobby Government with my colleagues to make this happen.”

I was delighted to receive a certificate of achievement for Stoke-on-Trent Central highlighting the events held across the constituency during UK Parliament Week 2020.