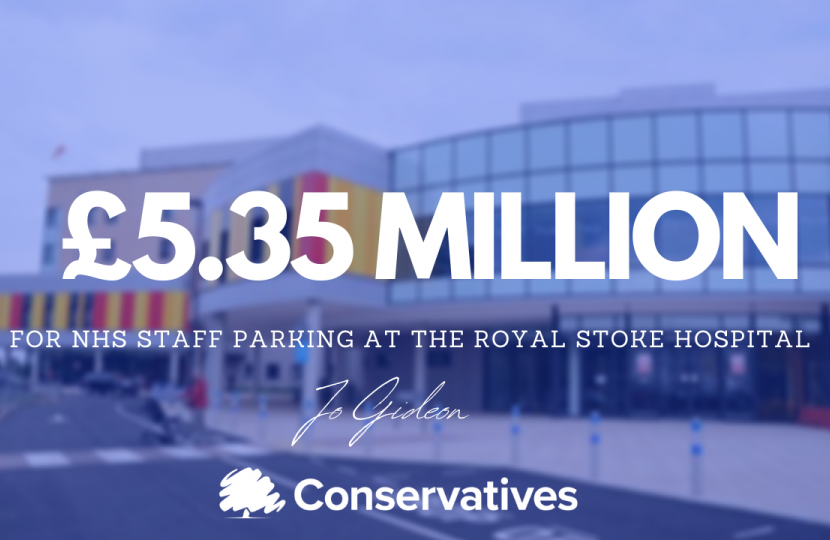 On Tuesday 2nd of March, Jo Gideon, the Member of Parliament for Stoke-on-Trent Central raised the need for reassurance of investment in NHS staff car parking facilities at the Royal Stoke University Hospital, from the House of Commons Chamber.

Jo Gideon has been working with University Hospitals of North Midlands NHS Trust (UHNM) and the other local MPs, Jonathan Gullis MP and Jack Brereton MP to secure Government funding for relocated staff parking to unlock the redevelopment of the old Royal Infirmary Site – an exciting regeneration project for the city of Stoke, called project STAR.

However, in 2014 the Trust secured outline planning permission to demolish dilapidated and disused buildings on the site and develop up to 236 new homes and up to 500 square metres of retail space. Last year (2020), the Trust received the necessary funding to undertake the demolition work on the old Royal Infirmary site, and this is now proceeding at pace.

With the demolition of this unused site underway, hospital staff were in need for the UHNM Trust’s proposed plans for a multi-storey car park to come to fruition, and the Trust needs capital funding to build this new facility.

Following Jo Gideon’s question in the Chamber, the three MPs for Stoke-on-Trent and the MP for Newcastle-under-Lyme, Aaron Bell met with the Minister of State for Health, Edward Argar to reaffirm and support Jo Gideon’s ask for funding for the multi-storey car park.

In response, the Health Secretary, Matt Hancock confirmed that the Royal Stoke Hospital will benefit from £5.35 million capital investment which will be used towards a land purchase to provide car parking, with planning permission for a multi-storey car park for NHS staff.

“I am absolutely delighted to have secured this very important funding and delivered results for our local NHS so soon after my recent Parliamentary question to the Minister.

I welcome the Government’s recognition of the importance of this project and the role it plays in providing much-needed additional staff car parking facilities at the Royal Stoke University Hospital while unlocking a hugely important regeneration project for Stoke-on-Trent on the old Royal Infirmary site.”

“This is fantastic news. Parking has been a massive problem since the new hospital was built and it is vitally important, we make it easier for people to access the Royal Stoke.

I am pleased our efforts in lobbying the Government for further investment in our hospital facilities has attracted the support of Government. This incredibly welcome boost for parking, comes alongside investment already secured in the 1A and 25 bus service which runs through the hospital site.”

“The announcement that the Royal Stoke University Hospital has received such a significant investment that helps us towards getting the funding we need for a new car park is great news for Stoke-on-Trent, Kidsgrove and Talke.

“On the back of the recently confirmed £16.9 million Towns Deal fund for Kidsgrove, the Government’s investment of more than £5 million is further proof that Stoke-on-Trent North, Kidsgrove and Talke is no longer being forgotten in Whitehall. This new multi storey car park will quite literally level up access to healthcare for North Staffordshire residents.”

“The redevelopment of the old Royal Infirmary site is a tremendously important project that will help transform this part of Stoke but we need to relocate NHS staff car parking from the old Royal Infirmary site before we can release the land for development.  We are grateful to Jo Gideon for her support for this project and look forward to making progress in the near future.”