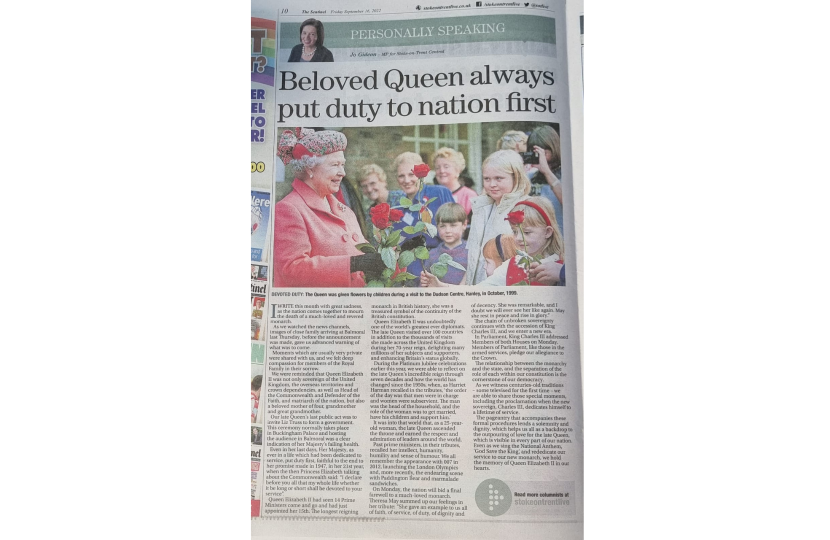 I write this month with great sadness, as the nation comes together to mourn the death of a much-loved and revered monarch. As we watched the news channels, images of close family arriving at Balmoral last Thursday, before the announcement was made, gave us advanced warning of what was to come. Moments which are usually very private were shared with us, and we felt deep compassion for members of the Royal Family in their sorrow. We were reminded that Queen Elizabeth II was not only sovereign of the United Kingdom, the overseas territories and crown dependencies, as well as Head of the Commonwealth and Defender of the Faith, and matriarch of the nation, but also a beloved mother of four, grandmother and great grandmother.

Our late Queen’s last public act was to invite Liz Truss to form a government. This ceremony normally takes place in Buckingham Palace and hosting the audience in Balmoral was a clear indication of her Majesty’s failing health. Even in her last days, Her Majesty, as ever in a life which had been dedicated to service, put duty first, faithful to the end to her promise made in 1947, in her 21st year, when the then Princess Elizabeth talking about the Commonwealth said: “I declare before you all that my whole life whether it be long or short shall be devoted to your service”.

Queen Elizabeth II had seen 14 Prime Ministers come and go and had just appointed her 15th. The longest reigning monarch in British history, she was a treasured symbol of the continuity of the British constitution. Queen Elizabeth II was undoubtedly one of the world’s greatest ever diplomats. The late Queen visited over 100 countries in addition to the thousands of visits she made across the United Kingdom during her seventy-year reign, delighting many millions of her subjects and supporters, and enhancing Britain’s status globally.

During the Platinum Jubilee celebrations earlier this year, we were able to reflect on the late Queen’s incredible reign through seven decades and how the world has changed since the 1950s, when, as Harriet Harman recalled in the tributes, “the order of the day was that men were in charge and women were subservient. The man was the head of the household, and the role of the woman was to get married, have his children and support him.” It was into that world that, as a twenty-five-year-old woman, the late Queen ascended the throne and earned the respect and admiration of leaders around the world. Past prime ministers, in their tributes, recalled her intellect, humanity, humility and sense of humour. We all remember the appearance with 007 in 2012, launching the London Olympics and, more recently, the endearing scene with Paddington Bear and jam sandwiches.

On Monday, the nation will bid a final farewell to a much-loved monarch. Theresa May summed up our feelings in her tribute: “She gave an example to us all of faith, of service, of duty, of dignity and of decency. She was remarkable, and I doubt we will ever see her like again. May she rest in peace and rise in glory.”

The relationship between the monarchy and the state, and the separation of the role of each within our constitution is the cornerstone of our democracy.

As we witness centuries-old traditions - some of which have been televised for the first time – we are able to share those special moments, including the moment of the proclamation when the new sovereign, Charles III, dedicates himself to a lifetime of service. The pageantry that accompanies these formal procedures lends a solemnity and dignity, which helps us all as a backdrop to the outpouring of love for the late Queen, which is visible in every part of our nation. Even as we sing the National Anthem, “God Save the King”, and rededicate our service to our new monarch, we hold the memory of Queen Elizabeth II in our hearts.