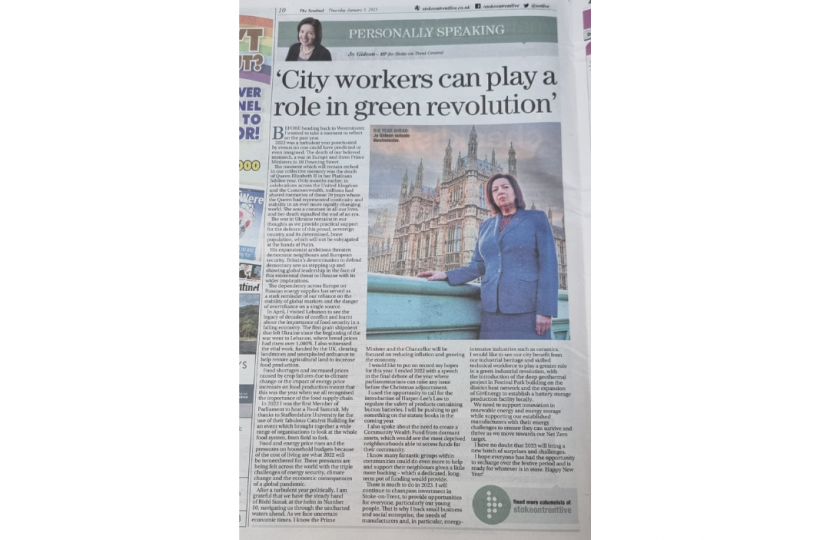 Before heading back to Westminster, I wanted to take a moment to reflect on the past year. 2022 was a turbulent year punctuated by events no one could have predicted, or even imagined: the death of our beloved monarch, a war in Europe and three Prime Ministers in 10 Downing Street.

The moment which will remain etched in our collective memory was the death of Queen Elizabeth II in her Platinum Jubilee year. Only months earlier, in celebrations across the United Kingdom and the Commonwealth, millions had shared memories of those seventy years where the Queen had represented continuity and stability in an ever more rapidly changing world. She was a constant in all our lives and her death signalled the end of an era.

The war in Ukraine remains in our thoughts as we provide practical support for the defence of this proud, sovereign country, and its determined, brave population which will not be subjugated at the hands of Putin. His expansionist ambitions threaten democratic neighbours and European security. Britain’s determination to defend democracy saw us stepping up and showing global leadership in the face of this existential threat to Ukraine with its wider implications. The dependency across Europe on Russian energy supplies has served as a stark reminder of our reliance on the stability of global markets and the danger of overreliance on a single source.

In April I visited Lebanon to see the lasting legacy of decades of conflict and learnt about the importance of food security in a failing economy. The first grain shipment that left Ukraine since the beginning of the war went to Lebanon, where bread prices had risen over 1000%. I also witnessed the vital work, funded by the UK, clearing landmines and unexploded ordnance to help restore agricultural land to increase food production.

Food shortages and increased prices caused by crop failures due to climate change, or the impact of energy price increases on food production meant that this was the year when we all recognised the importance of the food supply chain. In 2022 I was the first Member of Parliament to host a Food Summit. My thanks to Staffordshire University for the use of their fabulous Catalyst Building for an event which brought together a wide range of organisations to look at the whole food system, from field to fork. Food and energy price rises and the pressures on household budgets because of the cost of living are what 2022 will be remembered for. These pressures are being felt across the world with the triple challenges of energy security, climate change and the economic consequences of a global pandemic.

After a turbulent year politically, I am grateful that we have the steady hand of Rishi Sunak at the helm in Number 10, navigating us through the unchartered waters ahead. As we face uncertain economic times. I know the Prime Minister and the Chancellor will be focussed on reducing inflation and growing the economy.

I would like to put on record my hopes for this year. I ended 2022 with a speech in the final debate of the year where parliamentarians can raise any issue prior to the Christmas adjournment. I used the opportunity to call for the introduction of Harper-Lee’s Law, to regulate the safety of products containing button batteries. I will be pushing to get something on the statute books in the coming year.

I also spoke about the need to create a Community Wealth Fund from dormant assets which would see the most deprived neighbourhoods being able to access funds for their community. I know there are many fantastic groups within communities which could do even more to help and support their neighbours given a little more backing – which a dedicated, long-term pot of funding would provide.

There is much to do in 2023. I will continue to champion investment in Stoke-on-Trent, to provide opportunities for everyone, particularly

our young people. That is why I back small business and social enterprise, the needs of manufacturers and in particular energy intensive industries such as ceramics. I would like to see our city benefit from our industrial heritage and skilled technical workforce to play a greater role in a green industrial revolution, with the introduction of the deep geothermal project in Festival Park building on the district heat network, and the expansion of GivEnergy to establish locally a battery storage production facility. We need to support innovation in renewable energy and energy storage, whilst at the same time supporting in our established manufacturers with their energy challenges to ensure they are able to survive and thrive as we move towards our Net Zero target.

I have no doubt that 2023 will bring a new batch of surprises and challenges. I hope everyone has had the opportunity to recharge over the festive period and is ready for whatever is in store. Happy New Year!