£319,812 awarded to organisations in Stoke-on-Trent Central 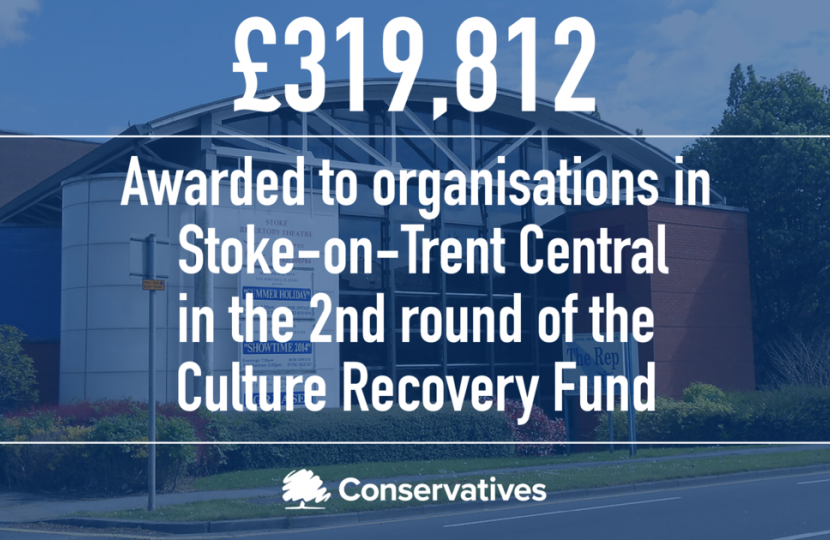 £319,812 awarded to organisations in Stoke-on-Trent Central.

The announcement comes as part of the second round of the Culture Recovery Fund.

I'm delighted that organisations in Stoke-on-Trent Central have received further Government support as part of the second round of the Culture Recovery Fund. The culture of our city is incredibly important, and this money will help these organisations as they start to reopen as restrictions allow. I can't wait to be able to return to these fantastic venues again soon and I know this money will make a massive difference in enabling them to prepare for reopening again soon.

Within this second round, over £390 million worth of funding has been allocated to over 2,700 arts, culture and heritage organisations in England. This now means nearly all of the original £1.57 billion Culture Recovery Fund has now been allocated, with over £1.2 billion in grants and repayable finance offered to more than 5,000 individual organisations and sites, and further grants to be finalised over the coming weeks. £188 million has been given to the devolved administrations through the Barnett formula, with Northern Ireland receiving £33 million, Scotland £97 million and Wales £59 million. £100 million has been given to national cultural institutions in England and the English Heritage Trust.

Funding has been awarded to the following organisations in Stoke-on-Trent Central:

Further details on the second round of the Culture Recovery Fund can be found at - https://www.gov.uk/government/news/400-million-to-help-more-than-2700-a…