Personally Speaking: "Lessons to be learned from my trip to Beirut" 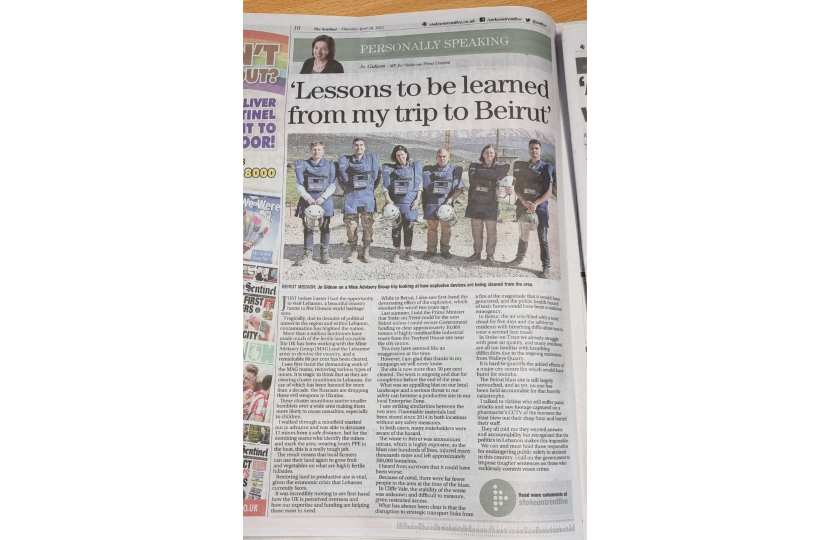 Just before Easter I had the opportunity to visit Lebanon, a beautiful country which is home to five UNESCO world heritage sites. Tragically, due to decades of political unrest in the region and within Lebanon, the nation has been blighted by contamination. Over a million landmines have made much of the fertile land unusable. The UK has been working with the Mine Advisory Group and the Lebanese army to demine the country and a remarkable 80% has been cleared. I saw first-hand the demanding work of the MAG teams, clearing various types of mines. It is tragic to think that, as they are clearing cluster munitions in Lebanon, the use of which has been banned for more than a decade, the Russians are dropping these evil weapons in Ukraine. These cluster munitions scatter smaller bomblets over a wide area so are more likely to cause casualties, especially children.

I walked through a minefield that had been marked out in advance and was able to detonate 12 mines from a safe distance, but for the demining teams who identify the mines and mark the area, wearing heavy PPE in the heat, this is a really tough job. The result though means that local farmers can use their land again to grow fruit and vegetables in what is highly fertile hillside. Restoring land to productive use is vital, given the economic crisis that Lebanon currently faces. It was incredibly moving to see first hand how the UK is perceived overseas and how our expertise and funding is helping those most in need.

Whilst in Beirut, I also saw first-hand the devastating effect of the explosion which shocked the world two years ago. Last summer I told the Prime Minister that Stoke-on-Trent could be the next Beirut unless I was able to secure government funding to clear approximately 30,000 tonnes of highly combustible industrial waste from the Twyford House site near the city centre. This may have seemed like an exaggeration at the time. I am glad that, thanks to my campaign, we will never know. The site is now over 50% cleared. The work is ongoing and due for completion before the end of the year. What was an appalling blot on our local landscape and a serious threat to our safety can then become a productive site on our local Enterprise Zone.

I saw striking similarities between the two sites. Flammable materials had been stored since 2014 in both locations without any safety measures. In both cases many stakeholders were aware of the hazard. The waste in Beirut was ammonium nitrate, which is highly explosive, so the blast cost hundreds of lives, injured many thousands more and left approximately 300,000 homeless. I heard from survivors that it could have been worse. Because of Covid there were far fewer people in the area at the time of the blast.

In Cliffe Vale, the stability of the waste was unknown and difficult to measure given restricted access. What has always been clear, is that the disruption to strategic transport links from a fire of the magnitude which it would have generated, as well as the public health hazard of toxic fumes would have been a national emergency. In Beirut, the air was filled with a toxic cloud for five days and the advice to residents with breathing difficulties was to wear a second face mask! In Stoke-on-Trent we already struggle with poor air quality and many residents are all to familiar with breathing difficulties due to the ongoing emissions from Walley’s Quarry, it is hard to quantify the added effects of a major city centre fire which would have burnt for months.

The Beirut blast site is still largely untouched and as yet no one has been held accountable for that horrific catastrophe. I talked to victims who still suffer panic attacks and saw footage captured on a pharmacist’s CCTV of the moment the blast blew out their shop front and buried their staff. They all told me they want answers and accountability, but recognised that the politics in Lebanon makes this impossible. In this country, we can and must hold those responsible for endangering public safety to account, and I call on the government to impose tougher sentences of those who recklessly commit waste crime.

The Harper-Lee campaign was started by the Sentinel and local MP Jo Gideon, working with Harper-Lee’s mum, Stacy, following the tragic death of Harper-Lee in Abbey Hulton last year. The campaign has been growing, with national and international support.