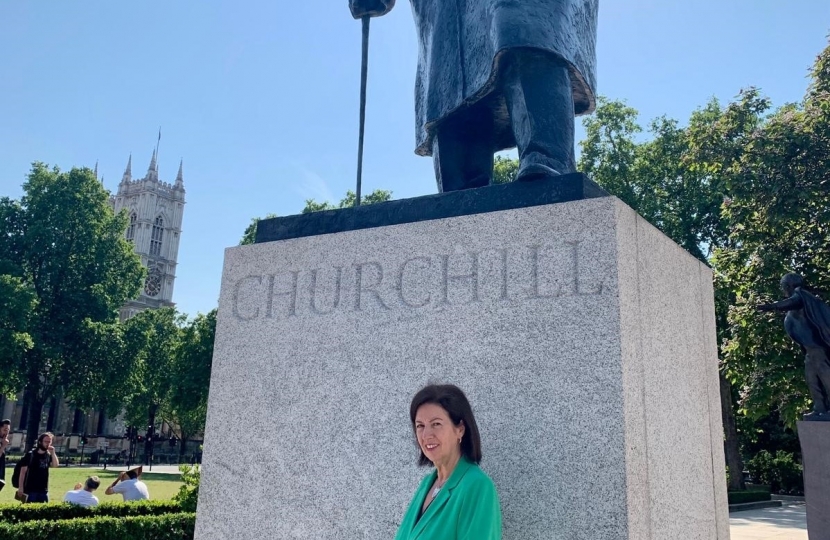 Discussion about the UK’s statues has taken centre stage in the past couple of weeks. No-one who respects our democracy, no-one who values the sacrifice made by so many to protect it, could have failed to share my outrage at the sight of the Cenotaph being violated and sadness at the need to board up the statue of Winston Churchill for fear of further attacks. I want to put on record my gratitude to the police who had the challenging task of protecting the public, our historic buildings and statues whilst under direct attack from a small group of extremists who used the peaceful protest for Black Lives Matter as cover for their anarchic agenda. I utterly condemn the callous actions of those who threw flares at the policewoman’s horse and those who cheered as her horse bolted. I hope she is recovering well after that terrible experience.

The BLM protests have been held across the country. I share and understand the anger following the brutal killing of George Floyd in the USA. I strongly endorse speaking out against acts of racism and believe passionately in freedom of speech. It is the basis of a civilised society. Here we had a peaceful protest in Hanley Park, where everyone tried their best to adhere to social distancing, but, given that government guidance was still that no more than six people should meet in a group, in these turbulent times, using  safer platforms such as social media would have been better. The recent government report confirms that the BAME community faces a greater health risk in this pandemic, and we know from Public Health information that mass gatherings will result in more cases of the virus in the BAME community. This is something which cannot go ignored and I have spoken about the subject, as Stoke-on-Trent Central’s representative, in the Chamber.

Those joining the BLM protests in Bristol escalated their activities by tearing down the statue of Edward Colston. Representations of historical figures, such as the slave trader Edward Colston, can be offensive reminders of past injustices and some suggest the protesters were right to tear down the statue and consign it to a watery grave. They argue that the Labour-run Bristol City Council had ignored democratic representations for years, leaving no option but direct action. However, the statue is now being restored and will be preserved. Graffiti artist Banksy has produced a sketch which sees the figure of Edward Colston back on its plinth, but with the addition of statues of the protesters pulling it down. History must not be airbrushed: Bristol was built largely on the profits of the slave trade. Incorporating the past and the present in a memorial, as Banksy suggests, might provide a way forward.

In Poole, there have been threats to the statue of Baden-Powell, founder of the Scout movement, because of condemnation of his political affiliations, and people guarding the statue before it was temporarily boarded up. Questions over the symbolism statues hold has spread to other pockets of society, which at its most extreme, led to the shocking behaviour seen in Westminster the following week. Many are asking where will this attack on statues end?

Some see the debate about statues as merely a distraction from the main issue of equality in our society and addressing racism. They see statues as no more than lumps of metal or stone. For others, the assault on statues is an affront to our democracy, especially when these monuments commemorate acts of bravery, such as PC Keith Palmer, who gave his life protecting the seat of our democracy, Parliament.

Wherever you stand on this issue, it is important to acknowledge that we all hold different world views, and that our own perceptions may cloud our judgement of others. We must constantly challenge our own views and be mindful of unconscious bias.  We must recognise that in a democracy, for everyone to enjoy the freedoms we all cherish, we must respect each other and the rule of law. If we allow a militant minority to threaten the stability of our civil society through unchecked, unilateral action, we will all be the poorer for it.

I'm delighted that Stoke-on-Trent will receive an additional £1.39m to raise education standards and to provide additional pupil support.