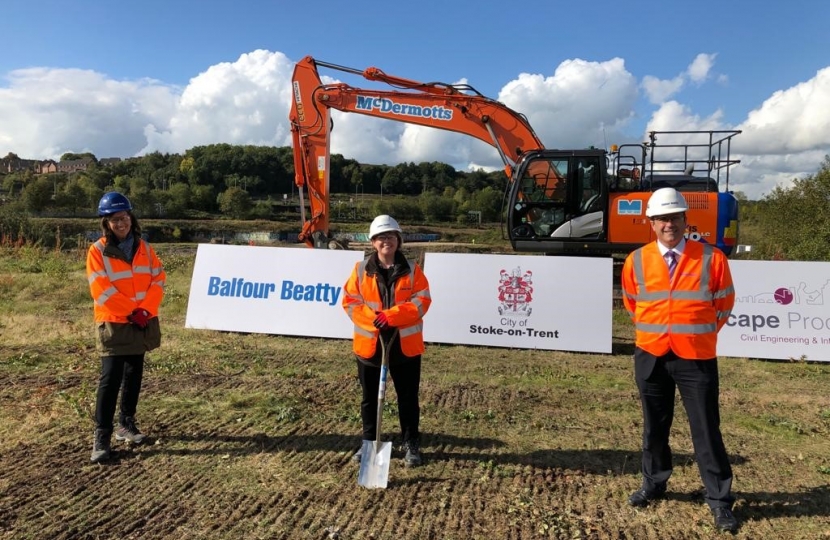 At no time since the Second World War has infrastructure and manufacturing been more vital in reigniting the British economy than it is now. The Potteries has been at the heart of Midlands manufacturing for centuries, and its unique geographical location places it in an ideal position to benefit from road access to all British markets.

Stoke-on-Trent has a proud industrial past and a tradition of heavy industry supported by a significant infrastructure. Josiah Wedgwood was the leader of the industrialisation of the manufacture of European pottery, and a pioneer of the canal infrastructure that defines our city. James Brindley is remembered as a designer and builder. Still, it was Wedgwood’s vision, and it was he who made it a reality, financing the network which enabled him to bring raw materials to his factory and carry the finished products to market.

The Shelton Bar steelworks began in 1830 and was supported by five coal mines, a complete railways system, and the Trent and Mersey canal. Many of those railway lines still exist and as part of the levelling up agenda, restoring key connections such as the Stoke to Leek Line, Etruria and Meir Stations has been a critical part of our ask of government, together with improved bus provision, using new and green technologies.

A new station in Etruria at Festival Park would go a long way to alleviating some of the traffic congestion at peak times (once we are operating in normal times) from the Ceramic Valley Enterprise Park, and I hope businesses and residents will support my campaign to secure this. In the meantime, last week saw the official start of work on the Etruria Valley Link Road, which will help the flow of traffic in an area that is an air pollution nightmare, and open up a new area of land for commercial development, driving new jobs to the area. The linking of infrastructure projects to jobs and new opportunities for residents is something I wholeheartedly back.

When we fast forward Stoke-on-Trent’s history, as traditional industries declined and the mines and the steelworks closed, new industries have sprung up which have taken advantage of an agile local workforce, new technologies and the creative spirit which is a fundamental ingredient in our community.

To service these new creative and digital industries, connectivity is as much about broadband speed as buses, trains and roads, and the opportunity for the creative industries to expand is reliant on the expansion of 5G in “Silicon Stoke”.

The public and private sector can work together efficiently to assist with our regional recovery plans. Our region was the worst hit in the UK, with the economy shrinking by 10% during lockdown. Manufacturing has been fundamental in the recovery so far, with the West Midlands being the top-performing region for increase in the Business Activity Index since the economy began to reopen.

Manufacturers have shown great flexibility and, supported by Government initiatives such as furlough and job retention schemes as well as bounce back loans, have weathered the Coronavirus storm.  In Stoke-on-Trent Central alone, the government has protected 11,600 jobs by furlough and £50 million+ to businesses to bounce back, through various loans and grants

In Stoke-on-Trent, we have a proud history of successful private enterprise as well as industries which have needed state support, and a community spirit which is second to none.  As we come out of this pandemic and as we establish ourselves as a global trading power post-Brexit, we are very well placed to take a leading role in the emerging green industrial revolution which will define our priorities in the coming years.