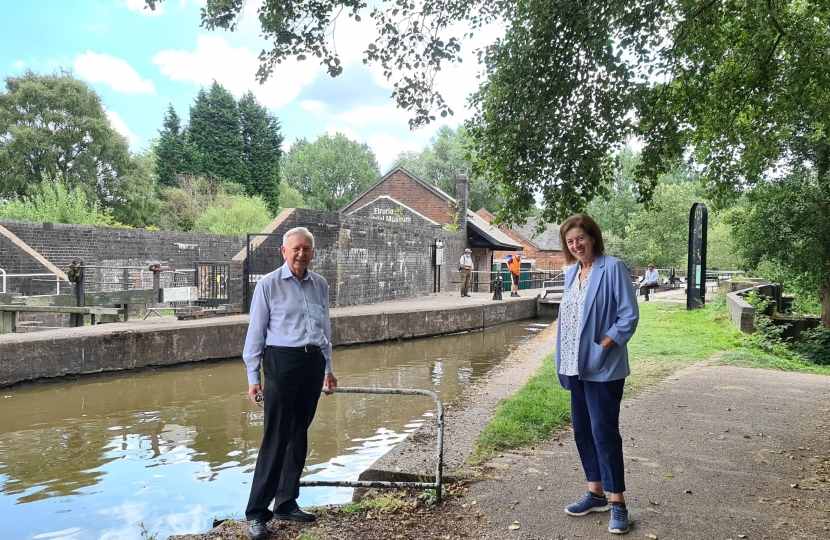 Enjoying and looking after our canals

We have all learnt new ways of living in the past few months as a result of this awful pandemic that has changed the world and threatened everything we used to take for granted. During lockdown, because of the temporary but narrowly defined freedom which enabled us to exercise daily, many people discovered, for the first time, areas of our City that lay on their doorstep. The Canal & River Trust reported that much higher numbers were using the pathways along our canal network. I was delighted to see for myself how vibrant the paths are becoming as communities bring new life to this amazing historic asset.

Stretching from Leek in the north-east to Etruria in the City; Kidsgrove in the north to Trentham in the south; the canals of Stoke on Trent cover some 18 miles. This linear waterway was constructed 250 years ago as the “motorway” of its time to transport materials to the factories of Stoke-on-Trent and then to deliver the finished products to the buyers throughout the world. This water transport system enabled many factories to grow from cottage industries to world-leading businesses.

As time has gone by the commercial need for the canals has diminished and they are now a recreational highway used by many people for a variety of uses.

This living waterway is not just a series of ancient monuments linked by water but, it is a natural linear waterpark with the benefit of a good footpath along its entire length. As it flows so gently the paths are generally flat except at the locks which raise or lower the water level and is very wheelchair friendly.

The canal is not only used by boaters but also fishermen, walkers, cyclists, and people who want some peace and fresh air. There is a large variety of wildlife along the canals; from vivid blue kingfishers darting from bush to bush to ducks, grebes and water voles. The trees which provide the side canopy for most of the length of the canals includes many fine examples of natural woodland growing within the City and create a natural habitat for birds, insects and other wildlife.

Canals naturally promote well-being and help to reduce built-in stress. It is well known that life is better by water and the canals are no exception. Even in a busy city where a significant number of the residents live within a mile of the canals there is a free resource to all to take a moment to appreciate nature.

We need to make more of the canals and the well-being that they generate. To do this we need more people and organisations to come forward to help the Canal & River Trust, who manage the canals, to make this local canal the best for everyone. Please get in touch with them directly or contact me and I will share your details with them.

I visited Twyford Lock  opposite the Cliffe Vale site, to see an area that might be developed into a community garden if local people want it. I also visited Middleport to see how the Trust have tackled the problem of graffiti by creating artwork that is far more attractive.

Many people have volunteered in the last few months and one of the results of my Coronavirus Survey points to the fact that almost everyone who has volunteered for the first-time during lockdown would like to go on volunteering. I would encourage anyone with an interest in local history to think about supporting organisations who rely entirely on volunteers – such as the Etruria Industrial Museum, which is a jewel in the crown of Stoke-on-Trent’s industrial heritage.

We need to ensure that the knowledge about the hey-day of Stoke-on-Trent’s ceramics industry is passed down to future generations for whom pots and pits are not part of their own life experience but are their heritage. We need to share this heritage more widely in a tourism experience to encourage more people to visit and spend in our local economy.

Local test centre pilots put in place to help residents who have symptoms of coronavirus get access to testing are set to be extended in Stoke-on-Trent and Staffordshire next week.