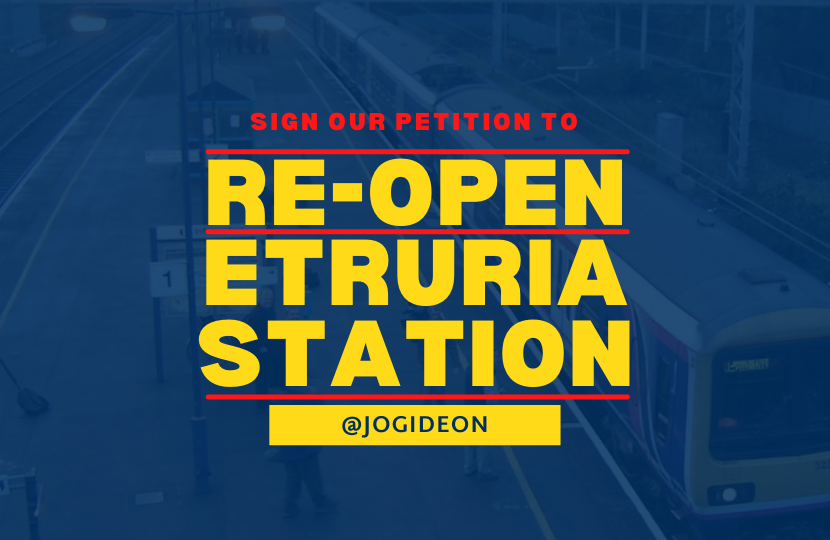 Jo Gideon MP has launched a petition to re-open a station in Etruria.

The petition will be presented to the Government and used to demonstrate local support for the station.

The petition asks the Government for funding from the Restoring Your Railways fund, to conduct a feasibility study of re-opening the station.

Jo Gideon, MP for Stoke-on-Trent Central, is submitting a bid to the Department for Transport for funding for a feasibility study for reinstating Etruria station as part of the Department’s Restoring Your Railway Fund.

Having received support for the proposal from Stoke-on-Trent City Council, local businesses such as Bet365 and Wade Ceramics, and nearby organisations and charities including Etruria Industrial Museum, Gideon has today launched a petition to demonstrate to Government that residents also support the proposals.

The petition, which can be found here, declares that re-opening a station at Etruria would provide better rail services in the city - vital for the growth of our local economy.

Whilst Stoke-on-Trent is well connected to national infrastructure, the local connectivity within Stoke-on-Trent and North Staffordshire is very poor, especially at rush hour, with heavy dependency on the car.  This dependency on cars comes despite 30% of the city’s population having no access to a (private) car.

In addition to this, the local station at Etruria was removed entirely by the Strategic Rail Authority despite private operators being willing to run trains there. This was done to the marginal benefit of slightly improved fast inter-city services but has further degraded local rail connectivity in North Staffordshire.

However, today’s  Government recently announced £29 million in transport funding for Stoke-on-Trent from the Transforming Cities Fund. This is being invested over the next three years across the city. But we can go further, with this petition we can show the Government that we want a new, better, Etruria station and petition them to agree to Jo Gideon’s bid for funding from the Restoring Your Railways fund so that we make a proper study.

“As well as developing our plans to restore the Stoke-Leek line, I have been working on the bid for a feasibility study to see if we can restore a railway station at Etruria.

“I am delighted that this has the backing of the local council, the Chamber of Commerce and local businesses such as bet365 and Wade Ceramics as well as the Canal and River Trust and Etruria Industrial Museum.

“There are just two weeks before the bid for Etruria Station needs to be submitted to the Department for Transport and in that time, I have launched a petition to show the government just how much support there is for the proposal among residents across Stoke-on-Trent.”

“Re-opening Etruria Station will be good for connectivity, boost jobs and improve air quality in a particularly congested part of the city and I would like to encourage local residents to sign this petition, or write to me, to show your support”