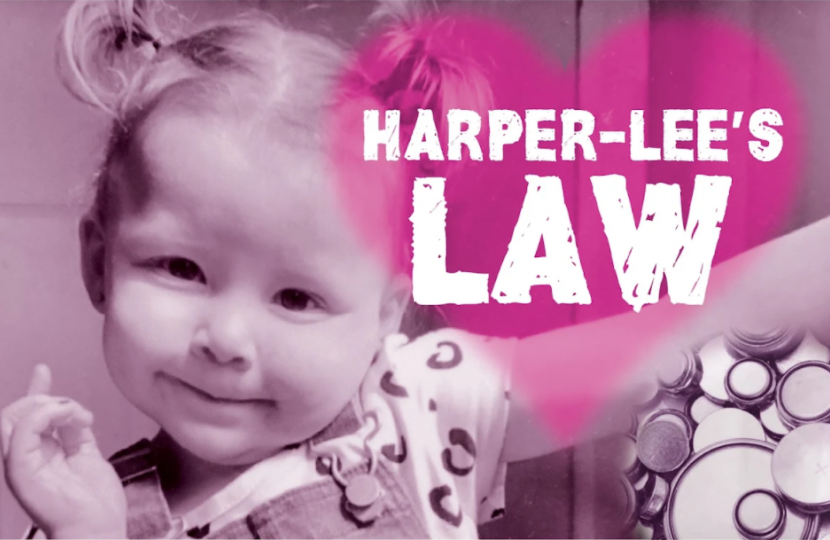 Harper-Lee was a happy, funny toddler who loved to sing and dance. On that fateful Sunday morning, she had watched her favourite Peppa Pig on television, then rubbed her eyes to show she was tired. Stacy lay her on the bed and left for work – just up the road. Two hours later, daughter Jamie rang to say something was terribly wrong. She had called an ambulance and Stacy rushed home to see Harper-Lee covered in blood. Initially, the doctors thought it was a burst tonsil, but the internal injuries pointed to the fact that she had swallowed a button battery that had burnt through her oesophagus.

At 10.17 that evening, Harper-Lee passed away in Children’s Intensive Care at the Royal Stoke Hospital. Stacy recalls Harper-Lee’s last words “Mummy I need you”, and Stacey said she loved her and would see her soon. Stacy is an incredibly brave mother who wants to ensure that what she and her family are going through does not happen to other families. It is her way of ensuring Harper-Lee’s legacy as well as helping her focus on a positive purpose as she is grieving.

“I am fully backing the Harper-Lee’s Law campaign. I made Stacy a promise that I would champion the campaign at Westminster. As a mother and grandmother, I feel particularly strongly that we need to do all we can to protect children, to educate the public, and to improve the safety of button batteries, through a range of improvements such as making them non toxic with a coating, better product packaging and labelling and display guidelines so this tragedy does not happen again.”

Jo Gideon MP is to raise the matter of button batteries in parliament. Harper Lee’s Law campaign will formally be launched in Parliament on Wednesday, 21st July, with a Private Member’s Bill, the Button Batteries (Safety) Bill. It will highlight the issues to raise public awareness and seek government support for a range of safety measures.

Jo Gideon MP has promised Stacy that she will take the campaign to Westminster and fight for Harper-Lee’s Law. In order to do so, Jo has stepped down from a government role, because the Department where she was a Parliamentary Private Secretary, BEIS, is the responsible Department for implementing the changes.

The purpose of Harper-Lee’s Law:

Button batteries are sold in many items aimed at young children – fast-food outlet free kids’ toys, books with sounds, birthday cards, lollipops with a children’s toy attached. However, Harper-Lee swallowed a button battery from an LED light remote control, and so many appliances that lie around the house may contain these potentially lethal batteries.